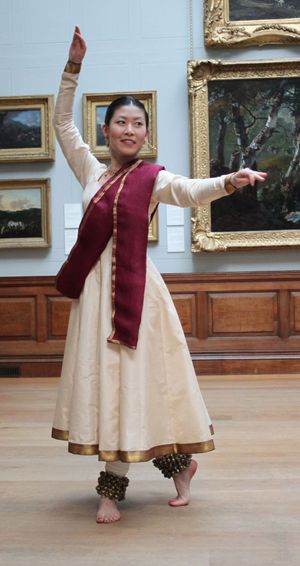 A London-based dance artist, Iris began training in Kathak at University of Surrey, first with Alpana Sengupta, and from 2007 with Amina Khayyam. Iris has performed with Amina Khayyam Dance Co in Yerma, A Thousand Faces,aa+sam, and other previous works since 2008. She also performed in Akademi's production of Bells and was involved in an R&D project Hasten Slowly by Kathak teacher and choreographer Nilima Devi in 2013. As a contemporary dancer Iris has worked with: Maresa von Stockert (R&D), Emily Jeffries (Measured Space), Florence Peake (MAKE and REMAKE), Janine Harrington (The Human Clock, The Bridge, and The Performing Book), Hannah Bruce (The Look of the Thing), Rosemary Lee (Square Dances), and David Waring and Melodie Gonzales (Hustler) amongst others. Iris joined London Contemporary Dance School in 2014 as a postgraduate student and will be completing her studies in 2015 with the postgraduate company EDge.
Aside from her performing career Iris is also passionate about her work in arts management and is currently a freelance administrator and project coordinator. She was previously administrator at Independent Dance from 2008-2013, and has worked with the following artists and organisations: Amaara Raheem, Evangelia Kolyra, Janine Harrington, Stephanie Skura, Sally E Dean, and Society for Dance Research.
LinkedIn / YouTube / Vimeo